We really hope you love the products that we recommended below. Just to make it 100% clear, Gifts in Seconds (GIFSEC) may collect a small share of sales or other compensation from the links on this page. All prices and images shown below are pulled from the Amazon API so you should have the latest price as of viewing the article. If you have any further questions you can read our affiliate disclosure here.

He’s always been there. A funny, kind, adventurous and slightly different looking version of your mom or dad. His rules are always a bit more relaxed, he’s constantly ready for fun and he never fails on handing out a little pocket money when needed.

Your uncle is a cool dude and it’s high time you showed him a little something in return. It gets even better, because as an often overlooked uncle he probably won’t be expecting any gifts. So he’ll be extra excited to receive one of these awesome, highly uncle-worthy items.

Your uncle is the person you turn to for carefree jokes, solid dating advice that you can’t possibly ask your dad about, and the occasional pocket money. He deserves recognition. Spelled out, straight on his chest.

In summer, men flock in huge swarms to the BBQ. Uncles make no exception to this migration pattern. They live to flip, prod and crisp just like any other testosterone-infused beefcake. This ultra decked out kit will allow your uncle to become the alpha and vanquish any other contenders to the BBQ king throne.

Clint Eastwood is a bit like your uncle. A lot, actually.

They’re both handsome, they’re both heroic and they’re both American legends. Honor this striking similarity by giving the gift of Clint. It’s timeless, like your uncle. So this will be a cool uncle gift

They had us at Pizza.

But now the classic Italian carb coma moved into the footwear sector and, to be honest, we’re just as excited. Delicious prints, goofy packaging, no matter how you slice it, your uncle will say “Cheesus Crust!” when he lays eyes on these puppies. If he’s not a weirdough.

Every uncle needs a Hawaiian Shirt. The more outrageous the better.

Why? Because he’s human.

Michael Buble strikes fear into the heart of alpha males everywhere. Your uncle is probably one of them.

By giving him this CD, you’re accomplishing two major things:

This one is a bit on the nose, I know.

Uncles love beer. Uncles take showers. Now, they can have both.

Ok, they can have one and a soapy reminder of the fact that they already think about beer too much.

Fanny packs are back and they’re cooler than ever!

Just take a peek outside your window and I guarantee you’ll see a teenager with clunky ’90s looking shoes and a fanny pack strapped across their chest. It’s what’s in, and every day you don’t buy your best uncle a fanny pack is a day when he’s shunned by society. Think about that.

For The Hemingway Moments

Hemingway liked to drink. He most definitely had a distinguished-looking hip flask. He was a man’s man. Bring a little bit of Ernest into your uncle’s life, but keep an eye on him. If he starts writing, he might have had too much to drink.

Your family needs protection in case a virus breakout turns everyone else into brain-craving lunatics. With this survival kit, he’s turned into a combination of Bear Gryllz and McGyver and soon enough he’s installing showers in the treehouse he’s built out of sticks.

A Leatherman is the kind of thing that guys should get as an initiation ritual into manhood. “Here, youngster is the key to the world!” You can do almost anything with this baby, from fixing the International Space Station, to handling Trout.

His skin is rugged. It’s no place for sissy pink cremes and flower-scented nonsense. That’s why smart people put musky smells in the cream and made them look downright tactical. Just another tool in his toolbox.

Something to wear at a Snooker championship…

Animate your uncle’s inner James Bond with this snazzy set. He’ll be ordering lagers: “shaken, not stirred” soon enough and mopping up the consequences with his sexy pocket square. Classy!

This is the kind of set that your uncle’s children’s children can inherit because it was made by Trolls in a magical forest in Germany. It’s got an adamantium core (I presume) and will withstand up to 8 hydrogen bombs. They’ll be clipping nails with this one way into the year 2525.

The stationary of an Earl

When penning letters to his many lovers, your uncle will shine in comparison with the other men on Tinder with this bombastic personalized stationery.

If he ever gets invited to the grotto (here’s hoping!) he can whip out this classic ensemble to impress bunnies. They are known to be attracted to red pajamas.

The time has come for your uncle to take control of his hair. What hair? Every hair. Why should he spend thousands of dollars at barbers and stylists when he can give himself a buzz cut in the comfort of his own basement?

Safe Harbor For The Essentials

Uncles are known for their need to have control over how and where their favorite devices are stored and charged. With this essential gadget HQ, this ancestral need will be satisfied. No more waking up in the middle of the night with that desperate, nagging feeling that his devices are all over the place and charging like lunatics!

A Wallet Fit For A Pimp

An RFID safe carbon fiber money clip. Yes, this is the wallet of the future, my friends! Your uncle will appreciate the fact that you think he has lots of money (to clip in his new clip) and might shower you with some out of sheer excitement with his spacy new gadget.

Step 1. Check if he already has it.

Step 3. Bask in the glorious and crippling addiction you have subjected your parent’s sibling to.

The Ultimate Save The World Trip

This is kind of like Red Dead Redemption, but in board game form.

Ok, it’s nothing like it – except – it’s amazingly made and hellishly addictive.

He’ll love it if he likes a challenge and doesn’t mind saving the world with his friends.

A travel accessory fit for a king

If your uncle loves traveling or travels for work (even if he hates it), this little accessory might make his life a whole lot easier. And if he’s never even thought about leaving the state, it’s mighty good looking just hanging on the bathroom door.

Something for the midnight fridge run

Last but not least, a pair of gloves that will allow him to expand the time he spends being your hardcore uncle – now also at night! He can fix stuff, cook, perform surgery, do needlepoint, all in pitch darkness. And without alerting anyone of his activities.

Your uncle loves you unconditionally, and even though he’s not expecting any of these fantastic uncle gifts, the fact that you’ve thought about him and bought him something special will warm his heart. Your status as his favourite niece and nephew is probably already pretty solid, but it doesn’t help to nudge him a little in the right direction.

Be sure to check out our articles on gifts for professors or gifts for 11 year old boys for more amazing gift ideas.

As an Amazon Associate, GIFSEC earns from qualifying purchases. 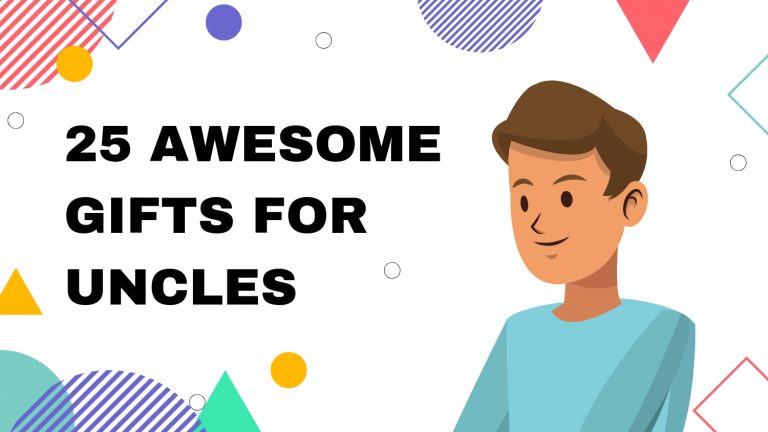