We really hope you love the products that we recommended below. Just to make it 100% clear, Gifts in Seconds (GIFSEC) may collect a small share of sales or other compensation from the links on this page. All prices and images shown below are pulled from the Amazon API so you should have the latest price as of viewing the article. If you have any further questions you can read our affiliate disclosure here.

It’s a hellishly complicated time to buy gifts for 11 year old boys. Does he want toys or games? What’s cool right now? What’s fun but also stimulating for his creativity and brain development? Looking at all these factors, buying something that he’ll love could seem like a seriously complicated, but ultimately exhausting shot in the dark. No worries, we got your back!

These gifts are specially selected to not only be fantastically cool, but also give your growing young man the stimulation he needs to put his noggin to work. Ok, you caught me there, some of them are also just cool. But a little extra cool never hurts in those treacherous pre-teen years, so he’ll love you for it.

Toys and Gifts for 11-year-old boys

A technically challenging racing machine. It’s covered in racing stickers, has a nifty pull-back “engine” and needs some careful assembly work. 11-year-old boys will have fun for months, first putting it together, and then setting the beast loose around the house.

The Dangerous Book For Boys

A guide to an adventurous life. This book has sold more than 1.5 million copies until now and is the kind of adventure bible every growing boy needs. Its beautiful pages are covered with essential information on things like building treehouses, tying knots, figuring out how to fish, finding true north and even some light touch dating advice for confused youngsters.

Ok, so, he might not admit it, but that young lad there would flip out if he got an awesome drone for his birthday or for Christmas. This one’s got it all, from 720p recording to live transmissions and even smart voice controls. If you want to give gifts for 11-year-old boys, this can be your option.

Gone are the days when the only place you could find robots was when they were chatting to Will Smith in movies. Now, you can have your very own piece of science fiction (or, better yet, fact!) right at home. Cozmo is also AI-powered, so he knows your name and remembers your face. If you switch to Explorer Mode, you can even see the world through his eyes.

3D printers are all the rage now, but they’re still pretty big and clunky. Not so with this nifty 3D printing pen. Boys can play for hours, creating awesome toys and figurines, unleashing their creativity and intelligence.

There is nothing more fascinating to growing boys than space. A location for epic intergalactic battles, incredible science, and immense beauty, space is something 11-year-old boys will love to explore.
This telescope not only boasts amazing image quality but is also easy to transport on trips, tucked away in a neat backpack. A definite bonus is also the Starry Night sky simulation software that contains information on thousands of celestial objects and dozens of multimedia astronomy learning tours.

This kit contains over 350 magic tricks that your little Houdini can use to impress his friends, and (in the far future) maybe some ladies as well!
As a bonus, the kit also includes 3 detailed ebooks about the fine art of magic, so if your little one is the bookish type, he might be the next David Copperfield in no time!

This is not your average kids’ scooter. It’s for “adult teens”, but will work well for an 11-year-old too. Now he can blitz to school in a cool cloud of confidence, not surrounded by squeaky plastic like the “little kids”.
The ride is exceptionally smooth and stable and some users have bought this for kids as young as 4! (ok, that little maverick was the exception, as the handle reached ear level).

This set up will help him become even more of a hero and vanquish his enemies in battle! If you’ve heard your little one mention anything about Fortnite or Apex Legends, that’s all you need to hear to know that this will be an amazing birthday gift for him. Specially built for eSports, and compatible with almost any console, this rig gives him the flexibility and range of movements that will make him love you forever.

Hoodies have been enveloping pre-teens and teens since the 1980s, but this very current version will knock his socks off. Bonus points if you can ferret out what his favorite character in Apex Legends is, and buy him the hoodie of his dreams.

This headset has it all: Dolby and DTS surround sound, an impressive adjustable boom mic, and quick to reach audio controls. This way, he can hear his enemies before they hear him, and win!

Minecraft is another game that your 11-year-old is probably a little obsessed with. Now, the whole world of the game can be his in real life, with this set with over 1500 individual pieces. If you want to remove him from the computer for a few hours and get him back to the real world, you can’t go wrong with this epic Lego set. It brings the cognitive enhancing magic of the Swedish children’s classic toy into his world.

He’s already naturally an explorer. Gardens, mountains, the vast expanses of games, he’s been on safari ever since he was able to walk. With this set, he’ll be well on his way to a high-value career in STEM or maybe at least to naming a few new species he’ll discover!

A toy that’s as challenging as it is fun, a Kano computer set is going to keep your little scientist busy for weeks. With fun challenges, but also learning adult level computing knowledge, this DIY machine will empower him to use his creativity. It teaches kids that technology isn’t scary, it’s something they can do themselves and sets them on the path of discovery!

Awarded the honor of “Best Student Microscope”, this beauty comes with an illustrated book about the wonders of microscopy. If you want to encourage your scientific-minded little one to go on the path of medicine or biology, this might do the trick.

He probably wants a GoPro already and doesn’t know how to ask for one. It’s not a cheap toy, this is a high-level action camera used by all his heroes to film cool stunts and youtube videos.

Dinosaurs + Helicopters = No-brainer. This Jurassic World inspired, technically engaging dinosaur and helicopter combo will tick all his boxes. It’s even got an ATV model, a dinosaur “trap” and figures for the beloved characters.

Is it a car? Is it a bee? No, it’s hours and hours of action packed fun! Some 11-year-olds will leave action figures behind at this age, but for some, this is their (Optimus) prime! This action figure is a shapeshifting yellow Volkswagen beetle and it talks. It has an energy core that lights up when you spin it and gives Bumblebee epic powers to battle Decepticons.

This is simply fascinating fun. With different 6 colours and a healthy helping of googly eyes to add to the magic, this magnetic putty is something for kids who are curious about science.

This is probably the best frisbee in the world. Its unique design combines the comfort of a grippy surface when you’re throwing, with a soft and heavy rim to give for accuracy and confidence when you’re catching. This is one of those toys that is simple but offers active outdoor fun for years to come.

Make his bedroom as extreme as his dreams. This duvet cover and pillow set will finally motivate your headstrong 11-year-old to make his bed because his heroes adorn his duvet cover!

This high powered racing car can get to almost 16 miles an hour and has almost 55 yards remote control distance. It’s waterproof and crash-proof, so if your rambunctious little friend likes to get wet and wild, he’s in for a treat. Just make sure you hose him off before he gets in the car!

If he’s got ambitions to be a rock star, an entry-level keyboard like this one from Pixio is not a bad place to start. It’s light and portable, and he can even take it to music lessons with him – when he’s not using the beats and recording functions to make his one groovy tunes.

Once upon a time, we had two styrofoam cups and a string. No need for primitive games anymore. Today’s kids can have access to cutting edge technology that would have put even the military to shame in the 1960s.
Now, he and his best friend can communicate covertly and share battlefield intel whenever they want.

The motherlode. Ok, this is probably what he’d want the most. It’s the best, most awesome new console. This is what The Verge, one of the world’s premier tech sites had to say about it: ‘It’s not just that the Switch has great games – it’s that games are better when they’re on the Switch.’ The great part about the Switch isn’t just the incredible game experience, but that you can take it with you – if you lift it from the dock, you can directly transition to handheld mode for gaming wherever you’re going.

He’s on his way to becoming a young man, but he still needs a little bit of fun on the journey. That’s why we picked 25 splendid gifts for 11-year-old boys that will make his eyes wide with excitement and his brain alive with activity. No matter if he likes dinosaurs or robots or music or space more, we’ve got you covered.

What do you think is missing from our list? Let us know in the comments and share this list if it’s been useful. Our mission is to never let a Christmas or Birthday stress you out again!

Be sure to check out our articles on gifts 13-year-old girls or gifts for your best friend for more amazing gift ideas.

As an Amazon Associate, GIFSEC earns from qualifying purchases. 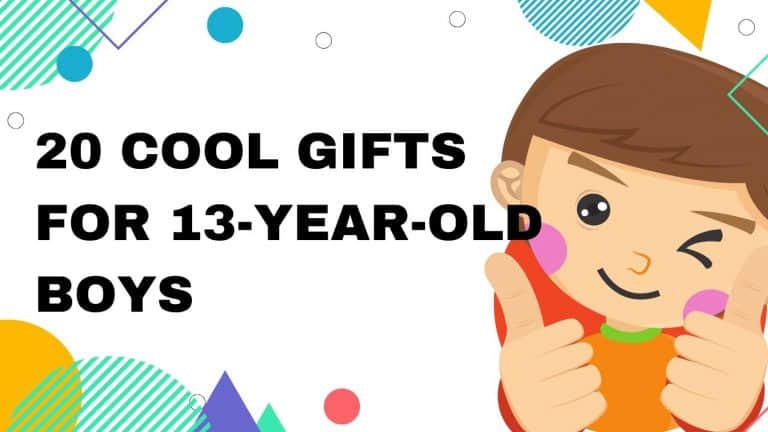